I call this “It’s Still Rejection Even If You Try To Hide It, Cart Outside The Rite Aid.”

And then, as I drank my refreshing Diet Coke and made my bi-or-tri-weekly post-Rite-Aid trek to the Hobby Lobby, I saw it: they were everywhere.  Sad, rejected carts.  Abandoned half-smoked cigarettes.  Uncapped and half-spilled glitter.  I was surrounded by rejection.

And I continued to be surrounded by rejection, and couldn’t help but document it.  Anything, it seemed, could be rejected, and rejection, it seemed, was everywhere.  There was rejection at the Wal-Mart: 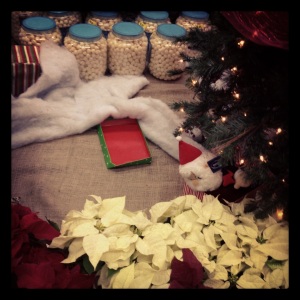 I call this “Rejection: Santa Claus by the Jarred Popcorn, Statesboro Wal-Mart.”

There was rejection on campus:

I call this “Rejection Outside of the Newton Building.”

There was especially depressing rejection on top of a random mailbox outside the K-Mart: 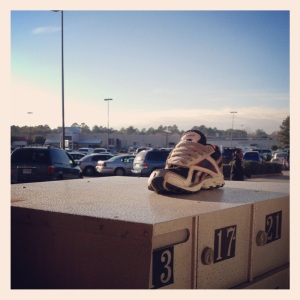 I call this “Rejection with No Further Comment Needed.”

There was even rejection at the happiest place on earth:

Over the past few months, I’ve become quite fond of rejection.  There’s something lovely about the objects that have been left behind, and about the story that led to them being left behind.

Tomorrow, I’ll be moving through our modern world’s greatest bastion of rejection, the airport, on my way to the AWP Conference in Boston.  I realized that there’s really no better place to look for rejection at a gathering of 10,000 writers, so I’m planning to post rejections as I come across them this week.

Get ready for abandoned Moleskines and Chuck Taylors, blogosphere.  Rejection’s about to get real.