Full disclosure: At the end of this post, I’m going to provide a link to a poem of mine that was recently published — but I wanted to say some things first.

In a lot of ways, the poetry world has become the Internet world; in a lot of ways, this has saved the poetry world. The Internet allows us a place to promote and share our own work, to talk, to bond, to work together. It gives us a space to share what we’ve read, the small miracles of language that can make very big changes in the world. The story of how Maggie Smith‘s hauntingly, searingly gorgeous “Good Bones” went viral serves as a testament to the power of the online world when it comes to getting good poetry out into the real world — something that itself seems like a miraculous resurrection of what many saw as a dying art.

In other words, the Internet has given poetry and poets something important, something necessary to achieve the goal of keeping one’s “career,” as it were, as a poet — and even the art of poetry itself — alive: exposure.

Damian Rucci makes some excellent points about the causes and consequences of this drive for exposure in this blog entry, which led me to think about how this drive for exposure has affected the way poets act and interact online. We all post about and share poems we’ve gotten published, which is an awesome thing. Lately, people have also started announcing their acceptances. That’s also an awesome thing. It gives us a chance to celebrate with that person twice.

A confession: sometimes, especially after rejections avalanche through my inbox, looking at my social media feeds makes me feel very happy for other people but very bad about myself. It’s like the creative writing version of FOMO: POMO, if you will, which may be the natural product of a shift in focus to the product and not the (very long, often incredibly painful) process.

I can’t help but wonder if this has also led to a shift towards the dark side in the poetry world. Maybe the thirst for exposure opened a space for predatory presses to pour in. Maybe POMO has played a part in the countless poetry battles that have spread over Internet territory for the past few years. Sometimes, the battles are definitely and absolutely necessary and for good reasons, like calling out predatory publishers, abuse, racism, misogyny, homophobia. Sometimes, though, things just get unnecessarily ugly. 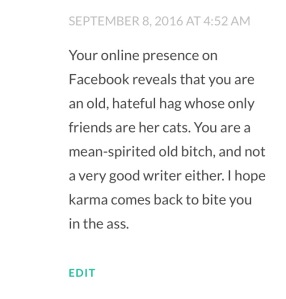 The trolling in question.

My own personal tipping point happened last week, when I got trolled by a figure a lot of people in the writing world have trusted with their work (and out of respect for that, I’m going to keep this anonymous). It was crushing and nasty but what made it even worse is that it wasn’t exactly shocking. It was just like the comments I’ve seen in writing world fights before. Debate and discussion is important and vital to the health of this art that we all love. Aggression, trolling, and abuse? Not so much.

Here’s the thing about poetry: we need community. We need to work with each other, and we need each others’ work. We’re a sparse and diverse group, so we need online spaces for our work and in which we can work together. And we have to work together. We are a group of people struggling to keep the love of our lives alive. We are a group of people united by the unbelievably important task of keeping the art that we love alive. We will gain nothing by tearing each other apart in the process.

In the end, the trolling didn’t crush me, but it did make me reconsider the way I behave in the online world (and, of course, the real world). I’m definitely guilty of focusing on the product: I’ve stopped writing blog entries about process altogether and started only posting about publications. I’ve been focusing on the exhibition, not on the art.

I’ve got a poem called “This Is Not A Poem For You” up on Switched-on Gutenberg. I wrote the first draft of the poem ages ago, in April of 2012, at the end of a thirty poems in thirty days project. I’d been writing about the same thing for months and I was sick of it, so I wrote this poem as a way to tell myself to stop. It was a good goal that the poem didn’t reach — in the end, it’s totally clear that it’s totally a poem about a you. Still, it was the beginning of a new phase, not just in my writing but in my life. It’s been rejected, revised, and resubmitted more times than I can count. There are a lot of things I don’t really love about the poem and I could probably ramble on for thousands of hours about those things. Even with its flaws, I love the poem for the place it holds in my life: it marks the moment when I started down the process of taking ownership of my life, when I started to stop looking for someone else to save me and instead started to save my own damn self.

In other words: yes, the publication is something, but the process was everything.

Also, so what if my cat is my best friend? I mean, look at her. She’s awesome. 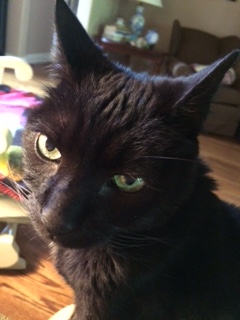