This blog has been on hiatus.  I’m sorry.  There have been circumstances.

I’ll be back from hiatus very, very soon, but in the meantime, here’s a poem of mine published in B O D Y.  The poem is about houses and how they know way too much about the people who live inside of them.  I’m really happy to have this poem published because it’s one of those gifts, one of those poems that feels like it comes out of no where, a poem that’s completely unplanned but alters the course of your work.  That’s absolutely true of this poem.  Though it was the first poem in what would become a lengthy series, which then became the backbone of the manuscript I’m putting together, I have no idea where it came from. 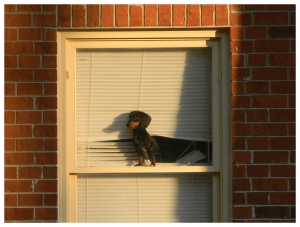 See? See what I mean here? This house? Totally a secret-blabbing jerk.

I mean, I really have no idea where this poem came from.  It just appeared.  I suppose that my mind has been working on it for quite some time.  I’ve always been fascinated with houses — I’m not sure how anyone who’s driven around at night and accidentally looked into an accidentally-still-standing-with-the-lights-on-and-without-the-blinds-drawn window isn’t fascinated with houses.  They seem like such solid, impenetrable structures by day — they seem trustworthy, willing and able to keep all of your secrets — and then, by night — no way.  Leave a single one of them without the blinds drawn, and that house is telling everyone what you’re doing inside.  This is a problem, obviously, because I think it’s pretty obvious that we as a species began building and living inside of houses so we could walk around at night in extra-extra large t-shirts, knock-around-shorts, and knee socks, singing songs with lyrics

Gertrude Stein appears not to have the same anxieties about houses, possibly because she’d just be embarrassed by me.

It’s possible that my mind has been rock-tumbling these ideas around for a while, without my knowledge, and polished them into a poem.  Much as I’ll never know the source of most of my ideas and decisions, I’ll never really know.  All I know is that I was in the middle of a Grind and wondering if I’d actually be able to finish the month, and then the poem appeared to answer my wondering.  It was a pleasant surprise, and I’m happy to have received it — and happier still that the good people at B O D Y liked it and wanted to share it.

(While you’re at B O D Y, by the way, you should check out fellow Grinders Ross White and Matthew Olzmann, two incredibly talented and all-around awesome poets whose work has inspired me and then inspired me again.)